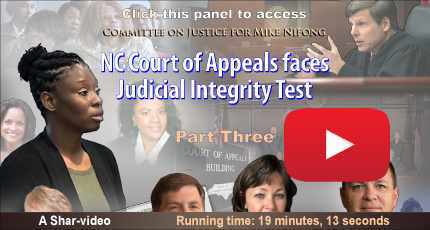 Posted by Nifong Supporter at 5:12 AM


kenhyderal said...
There were no HIPAA violations. Quote: "Although there was a possibility of a post surgical repair infection there never was one. His repaired wound did not kill him". The Respiratory Technician who actually accidently brought about his brain death was not subpoenaed and has faced no consequences. Your choice to characterize this matter as buffoonery is telling. Violations of Justice are matters of grave concern for all. "Injustice anywhere is a threat to justice everywhere”(Dr. Martin Luther King Jr.) This holds true even when the person treated unjustly is a marginalized, poor, black, single Mother of three. One day, those who know the truth be subpoenaed.


kenhyderal said...
@ Anonymous 8:24 Yeah, no dispute now but before, save Dr. Harr, most disputed that, including several Lawyers posting here who, like you, apply the wrongly cited precedent of Welch which is un-applicable, since there was, according to renown Forensic Pathologist, Dr. Cyril Wecht, an intervening cause. So, you and the others are wrong and Dr. Harr is, and always was, right. And, of course, there's the disgraced Medical Examiner Dr. Nichols "some sort of infection or some sort of other catastrophic illness" and his defending, Forensic Pathologist, apologist, albeit a feint hearted one, Dr. Roberts.


HEY, EVERYBODY... LISTEN UP!!
IMPORTANT ANNOUNCEMENT!!

The above two comments posted recently by kenhyderal I thought were well worth repeating.

It appears as though this shar-video will be comprised of five parts. Part Four I hope to be posted in two weeks... by Tuesday, February 18, 2020.

Note: Despite my herculean efforts, no media (neither mainstream nor alternative - nonprofit/independent, black, etc.) have published or aired anything about Dr. Cyril Wecht's report and its implications regarding the absolute innocence of Crystal Mangum. The media is working hard to keep the truths of Mangum's innocence from the people. This blog site is the only place where the truth can be objectively found.

When considering the message in this shar-video, along with the media suppression, it is clear that the courts and media are in cahoots with the State to vindictively deprive Mangum of justice in a cruel and malicious manner... the media acting as enablers for despicable behavior by the State and courts as well as being a collaborator after the fact. Agreed?

I thought the comment below posted recently by kenhyderal supporter is well worth repeating.


kenhyderal supporter said...
Right on kenhyderal. Anyone who actually knows Crystal rejects completely the vicious slander, that emananated from The Duke Lacrosse Defence, in an effort to destroy her credibility. These lies are ongoing and widely beleived. None of those who post their poison here have ever met Crystal. I ask them, don't you find it strange that her friends, her professors, her classmates her teachers, her pastor, etc. all have a favorable opinion of her and have provided her with character references. Hearing these references caused Judge Abraham Jones to declared that, from the evidence he heard, he beleived her to be "a good mother" Crystal is not and never was a prostitute. Crystal is not and never was a drug addict or an alcoholic. Crystal was a responsible parent. Crystal was a responsible member of her community. Crystal, having come from humble circumstances, was working hard to build a better like for herself and her children. Her Pastor advised her not to choose exotic dancing and escorting as a way to support herself because, regardless of her character,such a choice can be fraught with peril.

Sidney, HIRE A LAWYER!
You have some 60 people in J4N committee. If they each contribute $100, that will give you $6000 to hire an attorney. Note that I haven't even counted your acolyte Kennyboy, or his secret friend Fat Kilgo. They should each be willing to contribute $1000, which would give you a total of $8000.
Until you8've done this, don't talk about your "herculean" efforts.


Anonymous guiowen said...
Sidney, HIRE A LAWYER!
You have some 60 people in J4N committee. If they each contribute $100, that will give you $6000 to hire an attorney. Note that I haven't even counted your acolyte Kennyboy, or his secret friend Fat Kilgo. They should each be willing to contribute $1000, which would give you a total of $8000.
Until you8've done this, don't talk about your "herculean" efforts.

Again, a lawyer is not the answer. Like all of Mangum's previous lawyers, a new hire would take teh money and then sell her out. The incentives from the state, Duke, and powers-that-be would be too great to do otherwise. As you know, Crystal's had many attorneys who did nothing to help her. In fact, all of Mangum's prior attorneys allowed her to get convicted for a crime that never even took place. And Mangum's post-conviction attorneys allowed the three-year statute of limitations to expire on her malicious prosecution claim.

Keep in mind, that even with thousands of dollars there's no guarantee that an attorney would represent her. Crystal and I both tried in the past to retain attorneys, but they refused... Crystal's case is unique... unlike any other... a case wherein laws are ignored and justice abandoned. Salvation for Crystal will not come through lawyers.

Sidney,
OK, just give up.

No, quitting is not in my DNA... especially when truth and justice is on Crystal Mangum's side. I have very little confidence in attorneys and the justice system after everything Crystal and I have been through in the past eight years.

As I see it, the problem is not with the legalities of her case, but rather with the messaging. The mainstream media that is fighting to suppress the truths of Mangum's innocence... by keeping the report by Dr. Wecht hidden from the people, is the problem. That's the nut that needs cracking.

Who cares if the public knows about Dr. Wecht's report? The Court has it. Work on prosecuting the MAR, anything else is a waste of time.

@ Dr. Caligari: You, and American Exceptionalism deluded American apologists, are publicly in denial of the corrupt, broken and defunct U.S. Justice System. Abuses like the wrongful gaoling of Crystal Mangum have to be covered up at all costs using every Legal artifact available, installed and designed to maintain the corrupt "status quo", the facts be damned, justice be damned. Everybody, including you, knows Crystal is innocent of murder but acknowledging that would be throw unwanted light onto this outrage. Maintaining such a debacle requires the acquiescence of all it's self-serving practitioners and their misguided defenders. “There may be times when we are powerless to prevent injustice, but there must never be a time when we fail to protest.” - Elie Wiesel

Kenhyderal,
Is there any way we can get you to stop whining?
We'll forgive your racism if only you'll stop whining.

Look, Kenhyderal -- It's OBVIOUS Dr. Harr will not even attempt to assist CGM in getting a lawyer. Hell - he's personally responsible for her losing at least one WHILE SHE WAS ON TRIAL.

Why is that? I think the answer is rather obvious -- he wants control over CGM and wants her to think of him ONLY as truly on her side. Sidney thinks of himself and CGM as a "couple", and he wants to control that relationship.

If you're truly concerned about CGM,
1) come to Durham
2) pay for her lawyer
3) force Sid to give up all documentation he has concerning CGM's case
4) force Sid to refrain from contacting CGM in any way until the case is resolved
5) force Sid to stop sharing information about her and her case on this blog or anywhere in public

Huh? Who did Crystal lose as a Lawyer, while she was on trial? Spare us your unqualified psychoanalysis. Crystal is a lot more sophisticated then you give her credit for. She knows who has her true interest at heart. Dr. Harr is a person of courage who could never be coerced into abandoning his relentless search for true Justice. All Dr. Harr's documentation is available to anyone. Injustice in America thrives on concealing the truth and creating technical barriers to truth's exposure, unfortunately this is aided and abetted by it's nationally and universally despised Lawyers.

CGM lost Chris Shella as a lawyer after she shared information with Sid that he then posted on this blog, Then Sid started filing motions that ultimately led to his issues with the N.C. State Bar .
How do you NOT know this?

Crystal needs a lawyer. Your failure to assist her with this is noted.

Some of the posters are badgering kenhyderal. It is time for you to step in and control this inappropriate behavior.

In the year Crystal was being held without a court date, Shella, her Court Appointed Attorney visited her only three times for less than ten minutes a visit. This being the usual level of legal defence given poor marginalized minority Americans. The strategy is let them rot in gaol until they're desperate and then get them to plead guilty to a negotiated charge despite being innocent. One more time https://www.bbc.com/news/av/world-us-canada-20036674/conrad-black-newsnight-interview-in-full


Dr. Caligari said...
Who cares if the public knows about Dr. Wecht's report? The Court has it. Work on prosecuting the MAR, anything else is a waste of time.

But further, the media has an obligation to inform the people about newsworthy stories in order to rein in the powerful and keep them honest. If the media reported about Dr. Wecht's report, then those in positions of authority and the courts would behave more responsibly. If the public was aware of Dr. Wecht's report, they would demand that Durham District Attorney and NC Chief Medical Examiner respond... as well as Governor Roy Cooper and NC Attorney General Josh Stein. The media's silence about the truths of Mangum's case enables Cooper, Stein, Deberry, and Dr. Aurelius to ignore my attempts to present evidence of Mangum's innocence.


Anonymous said...
CGM lost Chris Shella as a lawyer after she shared information with Sid that he then posted on this blog, Then Sid started filing motions that ultimately led to his issues with the N.C. State Bar .
How do you NOT know this?

Crystal needs a lawyer. Your failure to assist her with this is noted.

Crystal asked me to get involved because the only actions Mr. Shella took in court was basically to have bond reduced. Surely the fact that she gave me a copy of prosecution discovery should not have been a reason for him to get off the case. My belief is that it provided him with an excuse to be removed from a case which he came to realize was a political bombshell. Instead of removing himself from Crystal's case, he should have worked with me. Had he done so, the issue of manner of death could have prevented the prosecution from even moving forward with taking the murder case to trial.

Crystal doesn't need a lawyer. She's had lawyers and she ended up with a second-degree murder conviction. Her appellate attorneys didn't bring forth the manner of death issue on appeal and allowed the statute of limitations to expire on the malicious prosecution issue. What would help Crystal most would be for the media to give her predicament the coverage it deserves.

I am requesting that you delete the post on February 8 by kenhyderal supporter supporter. Unfortunately this poster, who anonymously posts himself as my supporter is not sincere. He is, in fact, nothing but a mischief maker. This post,word for word is cut and pasted from a post I made a few years ago at the time of Crystal's trial for arson, where she was acquitted. He periodically makes this same post. Although it appears that he does support Crystal, that is really not the case. It's my belief he also uses other anonymous user names as well. I'm not sure of his/her motives but just to warn you those sentiments are not,in my belief, his/hers.