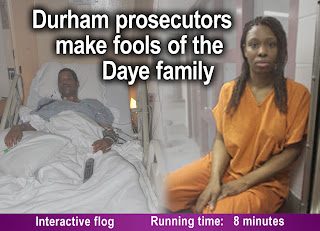 Transcript of narrative below

The Durham Police and the Durham prosecutors have mocked Reginald Daye’s family by convincing them to play the role of aggrieved family members spewing hatred towards Crystal Mangum.

These family members, like most uninformed and unenlightened people hold Crystal Mangum, the Duke Lacrosse victim/accuser, responsible for the death of Reginald Daye… her boyfriend at the time.

Recently, when Mangum has appeared in court for a hearing, Daye’s family would show up in the courtroom pews and with their glares shoot daggers at this young woman who has been charged with first degree murder in his death.

According to news sources, Prosecutor Charlene Coggins-Franks has even made a point of publicly pointing out their presence to the Court… taking the extra step of suggesting that some were still so distraught as to be weeping during the hearing.

Whether or not these courtroom theatrics were orchestrated by the prosecution, which is most likely the case, or the misguided creation of the Daye family itself, is unknown… but its intent is the same. The goal being to garner animosity against Mangum.

Prosecutors in this case need every possible advantage, as their case is non-existent. Evidence has readily established that Ms. Mangum was the victim of domestic violence, assault on a female, and false imprisonment by an alcohol intoxicated Daye.

Evidence furthermore supports that she stabbed him in self-defense, and that the wound she inflicted was not life-threatening.

Intubation of the esophagus instead of the trachea by medical staff at Duke University Hospital, as a complication of delirium tremens, was responsible for Daye’s brain death and cardiac arrest.

His subsequent elective removal from life support by Duke hospital staff resulted in his death… a death in which Mangum played no role.

A fraudulent autopsy report by North Carolina Deputy Chief Medical Examiner Clay Nichols served as the underpinning for the bogus murder charge against Mangum, and with the cooperation of the mainstream media, it has served to mislead the masses into believing Mangum was directly and solely responsible for his death.

The Daye family has bought into this fantasy and has been injecting their venom at an innocent person, Ms. Mangum… who is also a victim of their kin, Reginald Daye.

Surely, the prosecutors have represented themselves to the Daye family as sympathetic and empathetic fellow mourners out to get justice for Reginald, a valued member of society… but this is where the foolery begins.

It is unreasonable for the Daye family to think that the Durham Police and/or its prosecutors give a whit about Reginald… an African American man with a criminal record.

The contempt the police and prosecutors had for Mr. Daye is evidenced in their choice of an alias for him… using the initials of his first and last name, they came up with the moniker Richard Dong.

“Dong” is a vulgar slang word that refers to male genitalia… and its use, for the so-called alleged victim who they cared so much about, was inappropriate, offensive, and racist. Totally uncalled for.

Duke University Hospital had the decency, after Reginald Daye was admitted, to change his alias from Richard Dong to Richard Douglas.

The Daye family needs to stop being a prosecution puppet in the vendetta prosecution of Mangum and come to grips with the reality that they are being used by the prosecution in carrying out an injustice against an innocent person, Mangum.

If the Daye family wants to vent its hostility about Reginald Daye’s death, they need to direct it where it belongs… at Reginald Daye himself and the Duke University Hospital.

And, they need to cease being pawns of the prejudice prosecutors. 
Posted by Nifong Supporter at 7:57 AM 314 comments:

Click on the link below to view the flog and the directory.
They both have links to each other.


Transcript of the flog is below
Word count: 1,125
At the October 24, 2012 meeting of the North Carolina State Bar’s Authorized Practices Committee meeting held in , a decision was made to file a civil complaint against Harr enjoining him from assisting Crystal Mangum, the Duke Lacrosse victim/accuser who is currently facing murder charges.
The impetus behind the legal action stemmed from two documents Harr filed in Mangum’s case on August 7, 2012… one a petition for writ of mandamus to have the Larceny of chose in action charge against her dismissed, and the other to order her attorney, at the time, Woody Vann, to turn over all discovery which he had been withholding to her.
Harr drafted and signed these documents as a third party Pro Se petitioner and stated in the filings his arguments for having standing in the case.
The motion for a preliminary and permanent injunction against Harr was filed in the Wake County Courthouse in downtown on December 4, 2012.  In addition to mentioning the two petitions filed in August, the State Bar plaintiff also mentioned the previous incident addressed and resolved in the Bar’s July 17, 2012 meeting.

Also the Bar included in its complaint the August 13, 2012 letter Harr had written to Judge Orlando … which it evidently considered to be the province of licensed attorneys.  This transgression was never mentioned in the Letter of Notice the Bar sent to Harr in late August.

Harr responded to the civil suit on December 17, 2012, in a filing that denied that his petitions breached any law against lawyerly conduct as he was solely representing himself.

He furthermore asserted that the motions he drafted and filed for Crystal Mangum had been settled earlier and that he was within his legal rights to send a letter to a judge advocating for position or cause.

In addition to defending against the State Bar’s allegation, Harr filed two motions of his own… one to waive the general statutes that prohibit him from legally representing Mangum in Court, and the other to have oral arguments.

The reasons given for allowing him to represent Mangum were that she could not find a defense attorney that would be willing to attack the state’s deputy chief medical examiner, Dr. Clay Nichols, and willing to place Daye’s death on .

Finally, Harr requested oral arguments to better express his position to the presiding judge… something which was denied him in his discrimination lawsuit against in 2011.  Like , the Plaintiff State Bar has an exceedingly weak case against Harr and has no likelihood of prevailing in open court.

To improve its odds and lessen its exposure to ridicule and embarrassment, the State Bar, relying on Rule 12(c) in the state’s Civil Procedures, filed on January 14, 2013, a Motion for Judgment on the Pleadings.  This is a motion Harr believes to be rarely used, and definitely one of desperation.

Such a motion, if granted, would dispense with oral arguments in open court, which Harr had specifically requested in his initial response… with the ruling being made behind closed doors of the judge’s chamber based upon the pleadings filed alone.  In essence, it would once again deprive Harr of his day in court… this time as a defendant.

Plaintiff State Bar had sought to schedule the hearing on Monday, February 18, 2013… Presidents’ Day, a federal holiday.  A clever move on the part of the Bar to lessen the attention the event would receive otherwise.

On January 30, 2013, Harr received notice that the hearing would take place in Courtroom 10-C, before the honorable Judge Carl R. Fox.

The following day, Harr researched the web for information about the black-rober and learned the following about Carl R. Fox:
The significance of the above is that for more than forty years, the North Carolina Medical Examiner’s office has been at UNC-CH… moving in mid-January 2013 to its new facility in .

Therefore, throughout his more than two decades-long career as a prosecutor, Judge Fox had a close relationship with the medical examiner and its forensic team.

The conflict of interest clearly arises when one considers that the basis of Harr’s advocacy on Mangum’s behalf is due to the fact that her first degree murder charge is based on an autopsy report on Reginald Daye by the state’s deputy chief medical examiner… Dr. Clay Nichols, the Orange at UNC-CH.

Unfortunately there has been a concerted effort by all to conceal the spurious nature of the autopsy report… so egregious and damaging that it, alone, should be grounds for the dismissal of the murder charge Mangum now faces.

On February 1, 2013, Harr filed a Motion for Disqualification of Judge Carl R. Fox on the Claim of Partiality… for a reasonable person with full knowledge of the facts would believe that Harr could not receive an impartial ruling from Judge Fox.

North Carolina General Statutes and Canon 3(C)(1)(a) state that the “due process clause imposes on the trial judge the duty of absolute impartiality,” and provides that “upon the motion of any party, a judge should disqualify him or herself in any proceeding in which his or her impartiality may be reasonably questioned…”

Harr requested that the hearing to be heard by Honorable Judge Paul C. Ridgeway, a judge with no substantial ties to and .

The ball is now in Judge Carl R. Fox’s courtroom… the question being, will the black-rober recuse himself or fight to preside over the scheduled February 18th hearing.